Halloween has come and gone, but i have a few posts to share about our costumes and some of the treats we made!

My son was going to be a character from star wars rebels this year – sadly we purchased his costume, but his mom and dad were able to throw together a han and leia costume thanks to the thrift store and amazon.com!

For leia – i found a white turtleneck, white pants, brown boots, and a brown belt at the thrift store! These were all suprisingly not very hard to come by. Within two trips I had everything I needed. I had a harder time finding a white puffy vest, but my friend came to the rescue with that one! I put my hair in crown braids, and VOILA! instant Hoth Princess leia.

For Han Solo- my husband wore some navy blue dickies that he already had. We had plans to sew some ribbon along the side, but never got around to it.  Would add some more authenticity if you had the time…He found this shirt on amazon, and got a vest similar to this, also on amazon. He went all out and got a holster as well.

bonus shot: while at the zoo, earlier in october, we found some of our people! 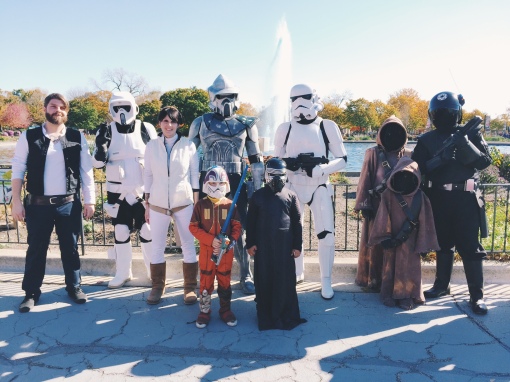