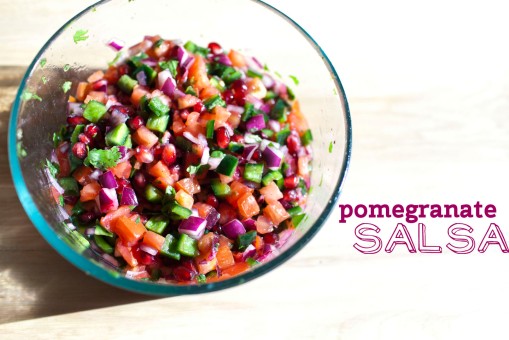 Warning: you will become addicted to this salsa.

well, at least I am. It screams summer!

We had some friends come over for tacos one evening and they made this salsa, and I was hooked. A week later, I made the same tacos, mostly to have a reason to eat this salsa again. I will be making this all summer long. Already on a hunt to find a poblano pepper plant so i can grow these in my garden this year, and always have an excuse to make this!

You will need:
2 pomegranates, remove all the seeds
2 poblanos
2 jalepenos (or less if you dont want it too spicey)
1 bunch of cilantro (add as much/little as youd like)2 limes, juiced
2 roma/plum tomatoes
1/2 red onion
Salt
pepper

Remove all the seeds from your pomegranate, chop all the vegetables and juice the limes over it all. Mix it up well and sprinkle with salt and generously with pepper. Serve with tortilla chips or put on top of grilled tofu tacos. but most of all, enjoy!

I have been wanting to upcycle something into a chalkboard forever. We have some space going downstairs that is the perfect place to put one. I set the bar high, and had some ideas to make one out of wood, possibly with a shelf….I’m kind of limited when it comes to tools, but I was going to see what I could do.

I went to ask milo’s papa if he happened to have some wood the size I needed, and instead he found me this “no parking” sign, that fit the space perfectly. I brought it home and gave it three coats of chalkboard paint and it works just great! No tools needed, and I was able to turn some trash into a pefectly good chalkboard. May not be as complex of a project as I had inteneded it to be, but it works in the space perfectly! 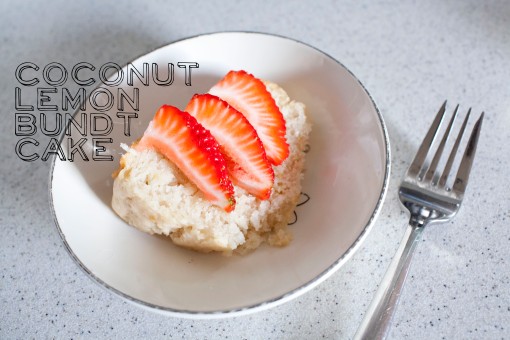 I was looking for something summery and light to bake – specifically something that used a lemon since I had one milo picked off my friends tree while in california a few weeks ago. I found this recipe, and it did the trick.  It was light and fluffy, not too sweet, and we were able to top it with some sweet strawberries I had picked up earlier in the day.

I think next time I will make some kind of lemon glaze for the top, but this was a great treat to remind us that summer is right around the corner.

Stir to combine. Pour batter into the Bundt pan.
Bake 1 hour or until a knife inserted through the cake comes out clean.

Remove from the oven and let cool for about 10 minutes, then place a cutting board over the cake pan, gently flip over and release the cake from the pan. Let cool completely.

Last up: Super hero party games!
We had the party at the field house at our park and the weather was kind of iffy that day, so we didn’t know how much time the kids were going to get to play outside. So we planned some indoor and outdoor games.

When the kids first arrived, I had them decorate their goodie bag with superhero stickers.

We played musical chairs to get the kids warmed up.

Then we played freeze dance. Here, they had a chance to freeze and do all kinds of superhero moves.

We then went outside and put a mask on my husband. He acted as the villian and the kids had to chase after them, wearing their masks of course, and if they tagged him he threw candy at them. 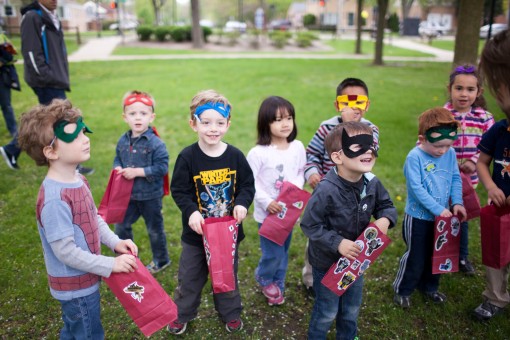 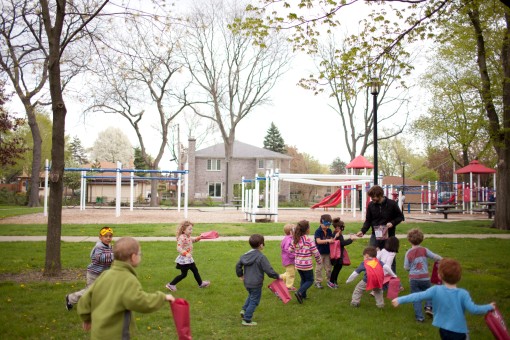 We planned a water balloon toss, but since it was chilly, we just had the kids run inside, grab water balloons and chase the villian, trying to hit him with water baloons. THIS was a HUGE hit. The kids were going crazy, having a blast! 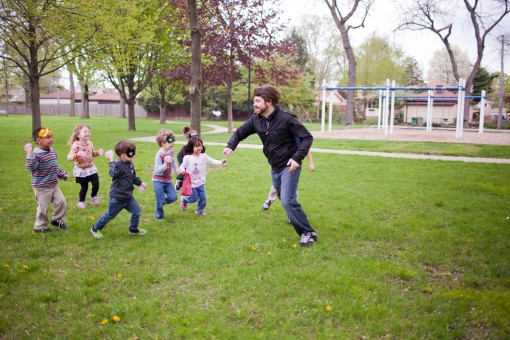 Last game before the pizza came was “tie up the villian.” we had four dads sit in chairs and gave the kids each a roll of toilet paper to tie up the bad guy. 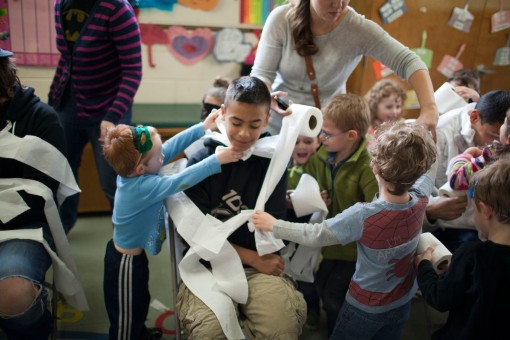 we didnt do winners/losers, since these kids are all around 3-5, and get their feelings hurt easily when they lose. During musical chairs if they lost, they got a turn to start/stop the music. We made sure we had plenty of candy for everyone so it felt like all the kids got alot. During the water balloon throw, each kid got to throw a few water balloons each. And during the tie up game, no team “won.” we just celebrated everyone and gave the kids lots of candy to take home!

Instead of party hats, I made all the kids superhero masks using this pattern. They also doubled as a party favor….All you need is some felt, hot glue, a sewing machine and some thin elastic.

Felt is in credibly inexpesnive, and I was able to fit three masks on one sheet. I purchased about a yard of elastic on etsy. I didn’t do them double sided, like she did in the pattern; I just used hot glue to affix the different colors and used my sewing machine to sew on the elastic.
These were great for all ages – we had babies wearing them, all the way to teenage brothers and parents!

This weekend we had a superhero themed birthday for my little guy, who turned four. It was a huge success, and I’ll share with you some of the DIY elements I did, as well as some of the games we played throughout the week.

I went to half price books and bought six comic books for 25 cents each. I also spray mounted comic books on the back of the invitation.  But for the bunting I just cut out a bunch of triangles, folded them over some yarn and used hot glue to keep them in place. We hung these from the ceiling above the tables and they made the perfect decor. It was super easy and inexpensive and something you can whip up in no time!

The Chicago diner has the best one to date. Doesn’t mean I’m not going to try to make them at home though!

Vegan eats world has a recipe, and I couldnt wait to try it. I made a batch of the seitan from the book and followed her recipe and it was a huge let down. It wasnt very flavorful. I had half the recipe of seitan left, and I was determined to find something to do with it. I did some research on the internet for other vegan gyro recipes and kind of made up a marinade and gave it a go.

I love serving these with sweet potato fries, complete with ketchup!

Here’s what I did.
First, make a basic seitan recipe. Slice it thin and set it to the side.

pour over seitan and bake in oven at 400 Degrees for 20 minutes.

Serve on warm pita with cucumber, tomato, avocado and some tazkiki!

Ever since I have seen this post, my mouth has been watering and I have been determined to buy a normal size donut pan. We bought a really big carton of strawberries, and they were getting a little wrinkly faster than we could eat them. It was a sign that these donuts must be made!

1 cup flour
1/3 cup sugar
1 tsp baking powder
1/4 tsp cinnamon
1/2 tsp salt
1/3 cup almond milk
egg replace equivalent to one egg
1 tbsp melted earth balance
10  medium to large strawberries (between 1/2 and 3/4 cup depending on size), pureed with 2 tsp seedless strawberry jam
1 tbsp pure maple syrup
Glaze:
3 cups powdered sugar
1/2 teaspoon salt
1/2 teaspoon vanilla
1/2 cups cold milk(I halved this and added about a tablespoon of the leftover strawberry mixture to this)
Preheat oven to 425 degrees.  Grease a 6-doughnut pan with baking spray.  To make doughnuts combine dry ingredients in a large bowl and whisk together.  Create a well in the center of the dry ingredients and add in almond milk, egg replacer, melted earth balance, and maple syrup.  Stir until well combined.  Stir in strawberry mixture, starting with 1/2 of it and adding more only if needed.  Batter should be wet, but not runny.  Put dough into a pastry bag or plastic bag and snip approx 1-inch off end.  Pipe batter into each well, reserving extra batter.  Bake for 7-9 minutes until doughnuts spring back when touched.  Let cool five minutes and turn onto a cooling rack to cool completely.  Spray pan again and continue with the rest of batter until all doughnuts have been made.  While doughnuts are cooling make glaze.  To make glaze, stir all ingredients together until smooth.  When doughnuts are cooled dip each into glaze  and place back on cooling rack to let glaze set.  When glaze has set enjoy! 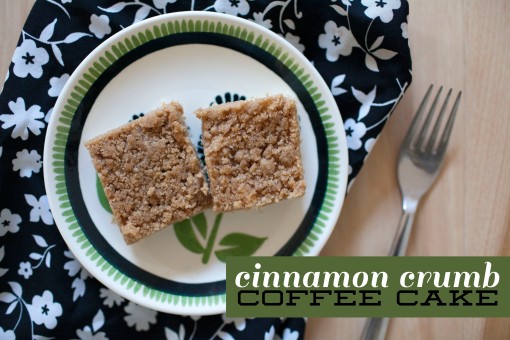 I have been looking for a reason to make this coffee cake from vegan brunch, since I bought the book a few years ago. I specifically stayed away from it beause I knew if I was left with this in my house, I would EAT IT ALL. I definitely have a soft spot for cinnamon crunch cakes. I was headed to a clothing exchnage with a pot luck brunch so I knew this would be the perfect thing to bring. It made just enough, and was a hit! There are all kinds of variations in the book, and I’m definitely looking forward to trying them all.

Preheat oven to 375. Grease an 8 inch round springform pan (or a 8×8 baking pan). Combine the milk and the apple cider vinegar and allow to curdle. Begin preparing the topping while this is happening.

In a small mixing bowl, mix together flour, sugar and spices. Drizzle the oil by the tablespoonful or so; use your fingers to mix it up really good, until it all turns into a crumb like mixture. Now its time to make the cake.

In a large mixing bowl, mix together the milk mixture, sugar, canola oil, and vanilla. Sift in the flour, baking powder and salt and mix until smooth. Pour the cake batter into the prepared pan and evenly sprinkle the crumb mixture on top, patting it down just a bit.
Bake for 35-40 minutes, until a knife inserted comes out clean.

I had some really over ripe bananas so I made some baked donuts! Baked donuts are definitely not the same as fried ones, but I’m scared to do all that deep frying in my kitchen ,so these will have to do for now…